The temperature of the BEC was approximately 200nK, and about 106 atoms were trapped.

The set-up for the study of optical lattices is currently under construction. To observe collective effects of atoms in an optical lattice a high density of the atoms is necessary and we are improving the cooling and trapping of the atoms towards this end. Atoms are slowed in the Zeeman slower and compressed in a magneto-optical compressor to a small beam diameter. This beam is deflected by a few degrees and thus separated from the "hot" beam. The "cold" beam is used to load a magneto-optical trap. To increase the density of the atoms in the trap we are exploiting the principle of a so-called "dark" magneto-optical trap. To create the optical lattice we have installed a new laser system with a Coherent Verdi 5W solid-state laser pumping a Coherent 699 dye laser, so the frequency of the lattice becomes tunable. This way we have sufficient intensity to create a deep optical lattice potential. 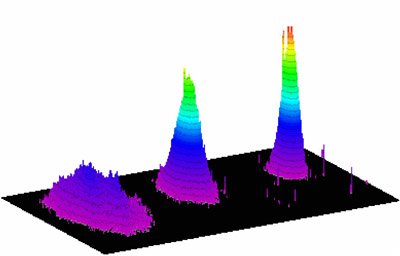