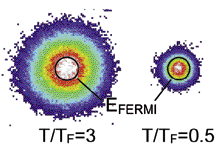 
"An evaporative cooling strategy that uses a two-component Fermi gas was employed to cool a magnetically trapped gas of 7 × 105 40K atoms to 0.5 of the Fermi temperature TF. In this temperature regime, where the state occupation at the lowest energies has increased from essentially zero at high temperatures to nearly 60 percent, quantum degeneracy was observed as a barrier to evaporative cooling and as a modification of the thermodynamics. Measurements of the momentum distribution and the total energy of the confined Fermi gas directly revealed the quantum statistics."