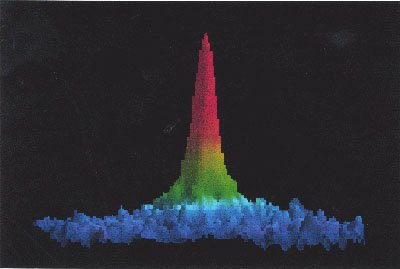 "BEC has been observed in 87Rb by the Kyoto University Quantum Optics group.

The first signal of phase space density of far above one appeared in the evening of 22 December, 1998. After some improvement of the imaging system, on 27 December we successfully obtained a clear bimodal distribution in a time-of-flight image.

The procedure of our experiment is now a standard one. About 109 87Rb atoms are collected in 1 minute in a double MOT configuration. The atoms are compressed and cooled further, then optically pumped into the |F MF> = |2 2> level, and finally 5 x 108 atoms are loaded in a clover-leaf magnetic trap. Oscillation frequencies of the trap after compression are 17 and 210 Hz, and the lifetime is 70 s. By several steps of exponential RF sweep, the atoms are cooled down to T ~ 500 nK in 1 minute, and an absorption image is taken 20 ms after a sudden switch-off of the trap. The expanded atom distribution shows a sharp anisotropic peak along with an isotropic background. The number of atoms in the condensate is 3 x 105 at present, and we are now trying to increase this number by optimizing the loading and evaporation path.

and is assisted by other members of the laser cooling group:

More details will be seen at our web page