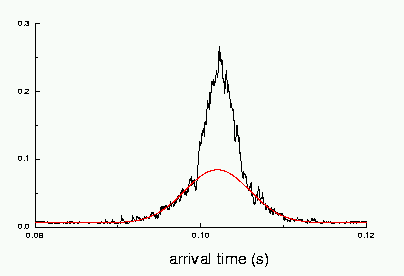 "Bose-Einstein condensation has just been produced in a new element, the first such in more than two years: helium.

According to our correspondent:

The helium team of the atom optics group of the Laboratoire Charles Fabry de l'Institut d'Optique in Orsay, observed a BEC of He* (in the 23S1 state) during the evening of 12 February 2001.

Our apparatus uses a cloverleaf-type magnetic trap with coils placed in re-entrant vacuum flanges. This design allows us to use a microchannel plate 5 cm below the trap to detect the atoms after releasing them from the trap. An example of a single-shot time-of-flight spectrum is shown in the figure above.

The horizontal axis is the arrival time of the atoms, but the distribution closely corresponds to the spatial profile of the atoms along one of the strong axes of the trap. The red curve shows a fit to the wings of the distribution giving a temperature of 0.7 mK. The condensate peak shown contains about 4000 atoms. The trap is initially loaded from a MOT with 108 atoms and the rf evaporation ramp lasts about 60 s. The condensate lifetime is at least 1 s. On this timescale, we see no evidence of Penning ionization in the condensate.

The current team members are:

and some of the recent graduates, who made essential contributions are: