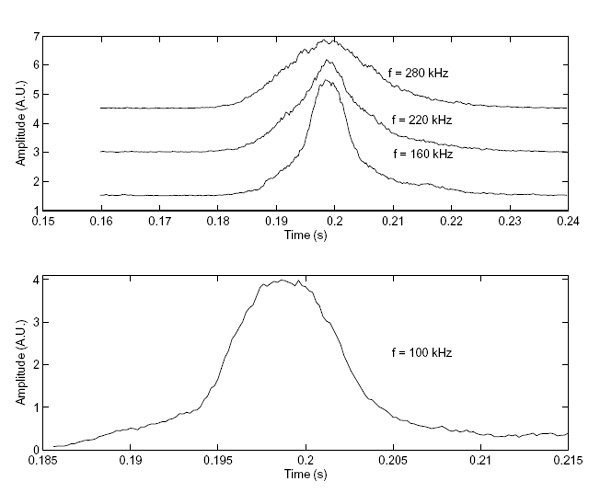 Figure 1: Demonstration of BEC.
Time of flight traces taken from an electron multiplier located directly under our magnetic trap. Traces are shown for runs of the experiment with different final evaporation frequencies. As the cloud is cooled down, a bimodal distribution is seen indicating the presence of a BEC.


In December 2005 we were able to condense He* for the first time in our laboratory. In our experiment we load around 5x108 atoms into a high vacuum magneto-optic trap (MOT) from a low velocity intense atomic beam (LVIS) of He* [1]. To transfer atoms into our magnetic trap we first spatially compress the MOT, by tuning the MOT laser frequency closer to resonance. Following compression the atoms are further cooled to around 200 µK by applying a 3-D Doppler molasses stage at which point the magnetic trap is energised with a bias field of 20 Gauss. In such a configuration the trap has very weak trapping frequencies, typically fr = 84Hz and fa = 75Hz, which minimises heating of the atomic cloud. At transfer we have around 3x108 atoms at a temperature of 600 µK. Immediately after transfer we apply a laser beam along the bias field of the magnetic trap, polarised such that atoms cycle back to the low field seeking trapping state. This laser beam is detuned ~ -Γ /2 from the mf =1 → mf = 2 transition and cools the atoms down to ~ 150 µK. The bias field of the trap is then reduced to 5 Gauss, increasing confinement and subsequently increasing the temperature of the gas. To remove this heat we apply a second Doppler cooling stage, once again achieving a temperature around ~ 150 µK. At this point, we have excellent starting conditions to achieve runaway evaporation. We evaporate in six seconds using a trajectory comprising seven linear stages. We reach the transition temperature at ~ 1 µK with around one million atoms.