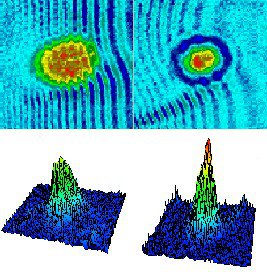 "BEC in 87Rb has been achieved at the Laboratory for Quantum Optics in the Shanghai Institute of Optics and Fine Mechanics, Chinese Academy of Sciences.

The first evidence of quantum phase transition after rf-evaporation cooling was observed on the 19th of March 2002. After some improvement of our imaging system and magnetic current power, the bimodal distribution of atom cloud can be now seen more clearly and repeatedly.

Our experimental details: we employ a standard double vacuum-chamber system. Cold atoms collected in the upper MOT are continuously loaded into the lower MOT by light pressure force. Within 15 s, about 6 x 108 atoms are trapped in the lower MOT with a temperature 210 µK. Then the transferring light is cut off and a 5-10 ms optical molasses cooling is applied. After that 3 x 108 atoms are left with a temperature 20 µK. In about 2 ms atoms are optically pumped onto a weak-field-seeker state, and loaded into a quadrupole magnetic trap with an efficiency of about 30%. Then atoms are compressed by ramping up the magnitude of quadrupole trap, and the atomic temperature increases to 150 µK. Atoms are then adiabatically transferred to a QUIC trap in 1-2s. About 1 x 108 atoms are detected in QUIC trap and the lifetime of atoms is about 50s. The radial and axial oscillation frequencies are 150Hz and 14Hz, respectively. The bias magnetic field is 5.4 Gauss. By logarithmically scanning rf frequency from 15 MHz to 3.77 MHz in 19 s and waiting for 100 ms re-thermalization, the absorption image of atom cloud is detected in-situ by a CCD camera. We observe distinct halo appearing around atom cloud near phase transition point, due to the diffraction- limited resolution of imaging system (top frames of figure). To correctly estimate the temperature, we adiabatically ramp down the trap magnitude (with cloud size enlarged and temperature decreased but phase density unchanged) within 1s, pictures are then taken 100 ms after the relaxation (bottom frames of figure).

Figure above: Absorption images taken before (top) and after (bottom) relaxation. The two left frames correspond to a final RF frequency of 3.90 MHz, the two on the right to 3.77 MHz.

It is observed that with lower final oscillation frequency, the central condensed part is gradually resolved from the thermal background. By fitting the data curve with a double-Gaussian distribution convolved with a point-transfer function of imaging system, we estimate the number of condensed atoms is around 1 x 104 and total 5 x 105. The transition temperature is around 250 nK. Error is mainly caused by defocus of imaging system.

The group members are: