"On 19th July at the University of Sussex we observed Bose-Einstein condensation of 87Rb atoms in a surface microtrap. Our atom chip consists of a single longitudinal wire embedded in the surface of a gold mirror and four transverse wires which provide axial confinement. The chip (see figure below) was made in collaboration with the Optoelectronics Research Centre in Southampton.

We collect 108 atoms in a reflection MOT formed above the atom chip and load 2 x 107 atoms into the magnetic trap. The trap is compressed to final frequencies of ωr = 2π x 830 s-1 and ωz = 2π x 24 s-1 and we evaporate by a logarithmic RF sweep from 13 MHz to 585 KHz in 12.5 seconds. The condensate forms 200 microns above the surface (Tc = 320 nK, 12,000 condensed atoms), and we image the cloud expanding in one-dimension along the guide 8 ms after turning off the axial confinement. The images above show the BEC forming at around 590 kHz. 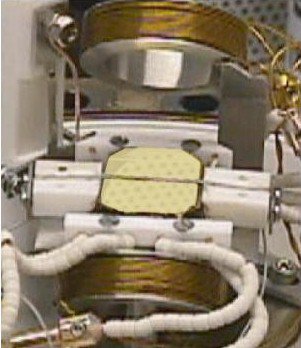 We are now located at Imperial College, London.