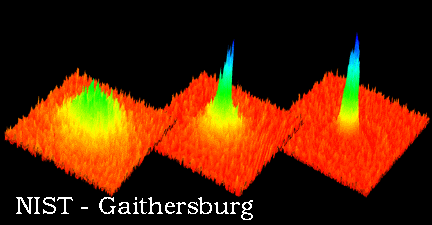 "This month's announcement comes from the Laser Cooling and Trapping Group at the National Institute of Standards and Technology in Gaithersburg, Maryland. Here is a copy of an e-mail message that they have circulated:

In the early morning hours (isn't that when these things always happen?) of 25 January 1998 the BEC Team of NIST's Laser Cooling and Trapping Group achieved BEC with sodium in a TOP trap. The procedure was to load a dark MOT from a Zeeman-cooled Na beam, cool in optical molasses and load into a static quadrupole trap. This was stiffened to 1000 G/cm to increase the Na density and evaporated for a few seconds with a linearly swept rf field. The TOP field (rotating at 20 kHz) was turned on quickly, producing a weak TOP trap that was evaporated by reducing the TOP field to 12 gauss, thus bringing in the "circle of death." This 20 second evaporation period was followed by a 20 second rf evaporation, and the sudden appearance of a condensate.

Since the first observation of BEC, we have obtained the condensate many times, and have been trying to get both good measurements of the phase space density and clean, interpretable pictures (at first, all the pictures, taken by absorption imaging, were completely black in the center of the condensate). We now have a phase space density, just before reaching the transition point, of 1.3 (on a scale where ideally, condensation occurs at 2.6, so we are within a factor of 2 of the expected value--recall that the phase space density depends on the 6th power of position measurements, so we are not unhappy with this early result).

In our most recent experiments we have achieved BEC by evaporating only with the circle of death. That is, the atoms from the MOT/molasses are loaded directly into a weak TOP trap (500 G/cm quadrupole, 150 G rotating field), and it is compressed to 1000 G/cm and 4 G rotating field, where condensation occurs.

Evaporation trajectories so far have been linear--that is, a linear change of the relevant parameter, whether rf frequency or rotating field strength. We have not yet optimized the evaporation.

At present, these are the approximate numbers: We capture a few times 1010 atoms in the MOT, mainly in the F = 1 hyperfine state, we transfer about 1/3 of these into the trap, trapping the F = 1, MF = -1 state. After evaporation and the achievement of BEC around 1 microkelvin, we have a condensate with several times 106 atoms.

The achievement of BEC and the recent experiments have been performed by a team of young scientists, in alphabetical order:

The work that led to BEC was begun and tremendously advanced by the efforts of:

Students contributing to this work have included

The senior NIST staff involved in this work are:

Update [June 1998]: Further developments have been reported at several recent meetings, and in a talk given by Ed Hagley at ITP on June 12, 1998, for which transparencies are available online."