Figure 1: Absorption images of the atomic cloud at different stages of the evaporative cooling, taken after 20ms free expansion.

We are happy to report our first observation of a Bose-Einstein condensate generated by all-optical means at the Institute for Molecular Science (IMS).

Methods:
We first load a standard magneto-optical trap using a two-dimensional magneto optical trap as a cold atom source. Trapped atoms are then transferred into the crossed region of our optical dipole trap consisting of three horizontally-oriented beams at 1064nm. In our dipole trap, two weakly-focused beams crossing at a shallow angle provide a large trapping volume, and another tightly-focused beam crossing these two beams at a 45-degree angle provides strong confinement, which is necessary for efficient evaporative cooling. We evaporatively cool the trapped atoms into a Bose-Einstein condensate by ramping down the power of the trapping beams in ~5 seconds.

Results:
Absorption images of the atomic cloud are shown in Fig.1. Figure 1(a) shows a thermal gas while Fig. 1(b) indicates the onset of condensation evidenced by the bimodal density distribution. Further evaporation leads to a ~60% pure condensate with about 30000 atoms, as shown in Fig. 1(c). The resulting condensate is a spinor mixture distributed among three magnetic sublevels of the 5S1/2 F=1 hyperfine level. 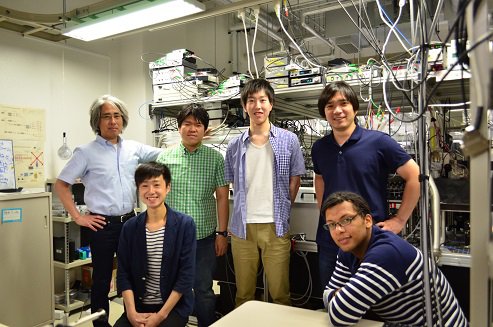