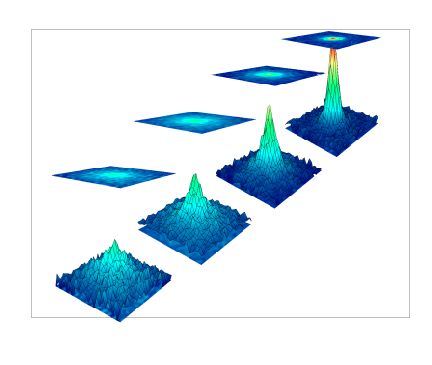 All optical sodium BEC (by evaporation)

The first observation of our sodium all optical-BEC was on 25 March 2005.

The BEC was generated in a crossed beam dipole trap. The trapping beams are produced by a commercial fiber laser which can generate up to 100 W of 1070 nm light. We load initially about 2 x 106 atoms in the crossed region of our trap and start the evaporation by lowering the trapping potential. After a 12.5 second ramp the final atom number in the BEC is 2.5 x 105. Furthermore by just retro-reflecting the trapping beams we are able to produce multiple BEC’s at the same time.

first picture: TOF absorption images of the atomic cloud for diffrent times during the ramp. One can see clearly the transition from the thermal cloud to the BEC.

second picture: TOF absorbtion images of the four crossed dipole traps before the evaporation and after the 12.5 second ramp.