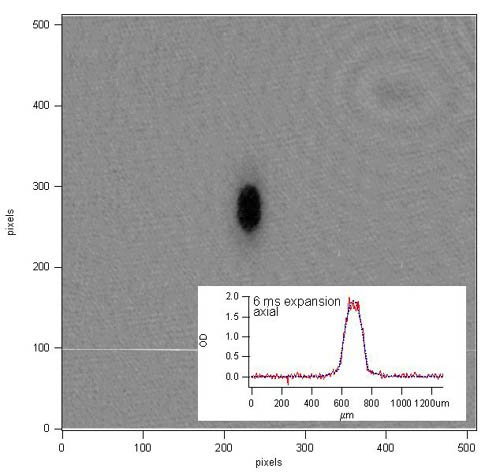 "As of September 13, 2001, we have achieved BEC in 87Rb. We load a MOT from a Zeeman slower (collecting atoms for 4 s). After a molasses stage, we load the atoms into a Ioffe-type magnetic trap. We adiabatically compress over about 4 s to an axial trap frequency of 13 Hz and radial trap frequencies of 272 Hz. We perform an exponential RF ramp from 35 MHz to around 1.1 MHz in 13 s, and end up with a condensate of several million atoms.

Figure above: Optical absorption image of a |2 2> 87Rb condensate, taken after 6 ms of free expansion folllowing release of the trap. Inset shows an axial slice of the optical denmsity function of the condensate; dotted line is a fit to a Gaussian + Tomas-Fermi distribution.

Participants in this work: