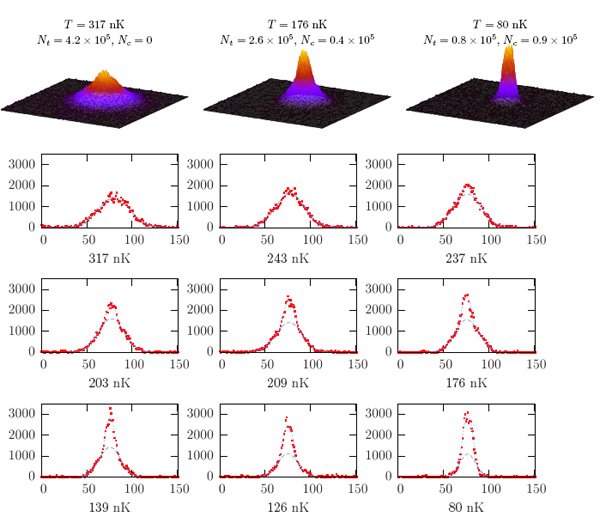 The laser for the dipole trap

The laser light used for the dipole trap provides from an Ytterbium fiber laser (IPG LASER, model YLR-300-LP) with a central wavelength of 1072 nm and a FWHM linewidth of 4 nm. We have adopted a crossed beam configuration formed by crossing two focused beams: beam (L1) is horizontal and has a waist of w1 ~ 40 micrometers and beam (L2) has a 45 degrees angle with respect to the vertical axis and a waist of w2 ~ 150 micrometers:

In order to control the laser power Pi (i=1,2) of both beams electronically, we used for each beam the first-order diffracted beam from a water-cooled acousto-optic modulator made in fused silica and designed for high power laser. The selected orders of diffraction ensures that beam L1 and (L2) have a frequency difference of 80 MHz. We achieve a pointing stability of better than 1 mm at a distance of 2 m behind the AOM.

An experimental sequence begins by collecting few 109 87Rb atoms in an elongated magneto-optical trap, loaded from a "Zeeman slower" source. The cigar-shape of the MOT results from the two-dimensional magnetic gradient configuration. Throughout the two second loading time, the dipole trap is leave on.

To maximize the loading of atoms into the dipole trap, the horizontal beam L1 is superimposed on the MOT along its long axis. In addition, we favour the selection of atoms in the hyperfine low level 5S1/2,F=1 by removing the repump light in the overlapping region similarly to the dark MOT technique .

Note that we could not reach the BEC threhold with a single optical dipole trap by contrast with experiment performed with CO2 laser. We suspect that it is due to the very low axial frequency (in the sub Hertz range) one ends up at the end of the evaporation ramp which renders the trap very sensitive to low-frequency acoustic noise. This is the reason why we have preferred a crossed dipole configuration.

A three second evaporation ramp suffices to form a condensate that has a spinor nature. We can thus achieve a duty cycle of less than 5s. First BEC obtained the 25th of September.